Captain Malcolm Reynolds—thief, smuggler, resistance fighter, and now captain of a crew of outcasts all the way on the farthest reaches of the ‘verse—wasn’t born an outlaw but he comes by it honestly. Turns out, his mother, the infamous Maude Reynolds, is at the top of the Alliance’s Most Wanted, and if Mal doesn’t get to her first, the Alliance will! Kicking off a new year of Firefly, discover the secret history of Mal and his mother, what that will mean for the rest of the ‘verse…and a new brewing war to end all wars.

Greg Pak is a Korean American filmmaker and comic book writer best known for his award-winning feature film Robot Stories, his blockbuster comic book series including Planet Hulk and World War Hulk for Marvel Comics, and his record-breaking Kickstarter publishing projects with Jonathan Coulton, Code Monkey Save World and The Princess Who Saved Herself. Pak’s recent comics projects include creator-owned series Ronin Island and Mech Cadet Yu from BOOM! Studios, as well as Kingsway West from Dark Horse. With artist Takeshi Miyazawa, Pak co-created the character of Amadeus Cho, who won a 2005 Marvel.com fan favorite poll, co-starred for four years in Incredible Hercules, and is now the star of Totally Awesome Hulk. Pak’s run on Marvel’s Incredible Hulk was named the Best Ongoing Series of 2007 by Wizard Magazine and Pak’s Magneto Testament was named the Best Miniseries of 2008 by IGN. 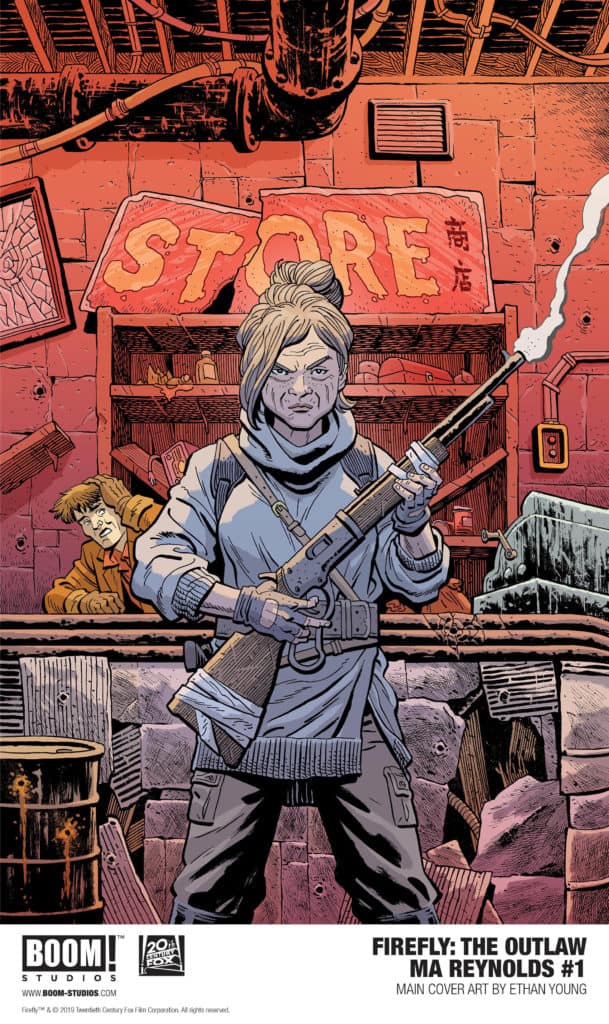 “One of the ongoing joys of working on the FIREFLY comics has been the incredible room Joss Whedon and company have given us to explore and expand on the ‘Verse they created. OUTLAW MA REYNOLDS may be the biggest example of that — Malcolm Reynolds talks about his mom in the television series, but we’ve never seen her until the comics. And now we’ve unspooling an epic tale of the badass outlaw Ma Reynolds and shaking Mal’s status quo to the core in a story that truly feels like it matters to this world and these characters,” said writer Greg Pak. “It’s a huge pleasure and honor to build on that sweet, loopy Firefly vibe that I love so much. Huge thanks to Joss, all our creative collaborators, and especially all the readers who have made all this possible.”

Davide Gianfelice was born in Milan, Italy in 1977. He is a comic book artist who has worked for Vertigo on the acclaimed first run of Northlanders and Greek Street. Gianfelice has also worked on various comic book series including Nightwing and Flash for DC Comics, Age of Apocalypse for Marvel Entertainment, Conan the Barbarian for Dark Horse, and Jupiter’s Circle for Image Comics. In his spare time, he enjoys playing sports, cooking and travelling around the world.

“I’m very excited to illustrate the story of a character as interesting as Maude Reynolds from the Firefly universe. It’s been a very fun experience working with Greg to bring Ma Reynolds, Malcolm Reynolds, and the rest of the crew to life as they cause mayhem throughout the galaxy.” said artist Davide Gianfelice.

“Maude Reynolds is tough as nails, smart as a whip, and if you can believe it, an even bigger revolutionary than the son she raised as a Browncoat. So what happens when this unstoppable force of a woman meets the immovable stubbornness of her son? Enough sparks to jump start a war,” said Jeanine Schaefer, Executive Editor, BOOM! Studios. “Mal and the crew will have their hands full dealing with their latest bounty, THE OUTLAW MA REYNOLDS, and we can’t wait to show fans what happens next!”

FIREFLY: THE OUTLAW MA REYNOLDS #1 is available January 15, 2020 exclusively in comic shops (use comicshoplocator.com to find the nearest one) or at the BOOM! Studios webstore. Digital copies can be purchased from content providers, including comiXology, iBooks, Google Play, and Madefire.

FIREFLY: THE OUTLAW MA REYNOLDS #1 is the newest release from BOOM! Studios’ eponymous imprint, home to critically acclaimed original series, including Once & Future by Kieron Gillen and Dan Mora; Faithless by Brian Azzarello and Maria Llovet; Abbott by Saladin Ahmed and Sami Kivelä; Bury The Lede by Gaby Dunn and Claire Roe; Something is Killing the Children by James Tynion IV and Werther Dell ‘Edera; Klaus by Grant Morrison and Dan Mora; and the upcoming Folklords by Matt Kindt and Matt Smith. The imprint also publishes popular licensed properties including Joss Whedon’s Buffy The Vampire Slayer from Jordie Bellaire and David López; Angel from Bryan Edward Hill and Gleb Melnikov; and Mighty Morphin Power Rangers from Ryan Parrott and Daniele Di Nicuolo.