“Fast-paced and well told, this story really made me think I was watching it on TV.”—Major Spoilers

The game’s afoot in BEN 10™: THE MANCHESTER MYSTERY as Ben Tennyson attempts to solve the mystery of a famous haunted house! Solving the Manchester Mystery would guarantee Ben a spot on his favorite supernatural television show but as he investigates the abandoned home, with his trusty cousin Gwen and Grandpa Max to round out the ghost hunting team, new secrets are revealed and it turns out not everything is as it seems. Science meets the supernatural as Ben wields the Omnitrix to pit aliens against ghosts in this thrilling new tale of mystery!

CB Lee is a Lambda Literary Award-nominated writer of young adult science fiction and fantasy. Her works include the Sidekick Squad series (Duet Books), Ben 10™ (BOOM! Studios), and All Out (Harper Teen). CB loves to write about queer teens, magic, superheroes, and the power of friendship. When not nationally touring as an educator, writer and activist, CB lives in Los Angeles, where she can neither confirm nor deny being a superhero. 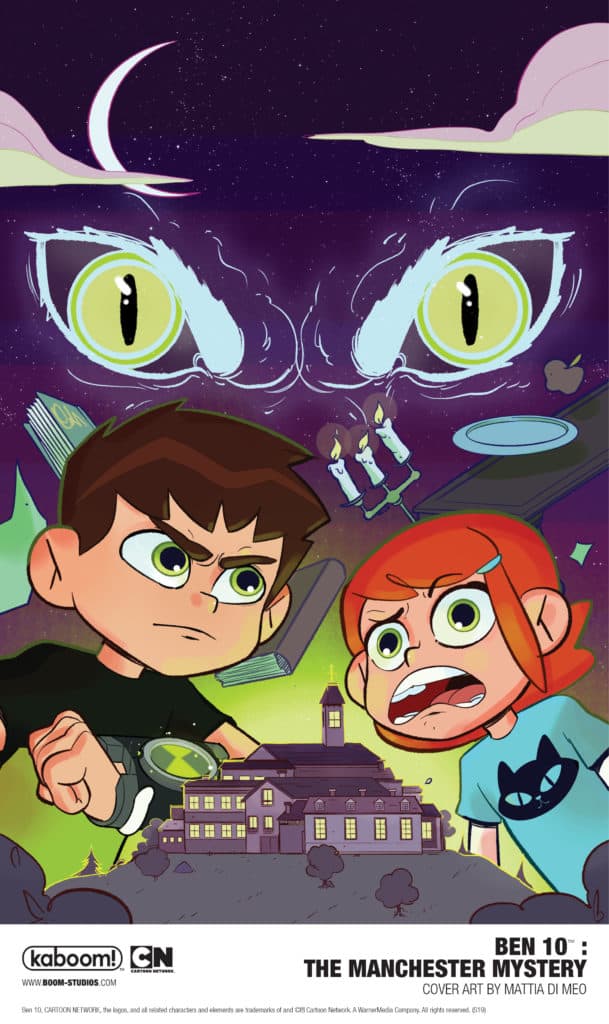 “Ben thinks he’s going to be bored at the ‘Living Museum’ at the historical reenactment town of Manchester, but when he finds out his idols the Mystery Boys are there investigating some strange disappearances, he’s excited to prove himself.” said writer, CB Lee. “ It was so much fun to write this ghostly adventure with Ben, Gwen and Grandpa Max as they put together clues and solve a mystery!”

Francesca Perrone is a comic book artist from Italy. In 2017, Perrone graduated from the Scuola Internazionale di Comics in Naples. Perrone has drawn a series of covers for the Steven Universe comic book series for BOOM! Studios, and in 2019, will debut Bianca – Little Lost Lamb with Italian publisher, Shockdom.

“What mysteries lie in the Manchester House? Could it be… haunted? It’s up to Ben, Gwen and Grandpa Max to find it out in this thrilling new adventure,” said artist, Francesca Perrone. “I couldn’t have been happier when I received the chance to bring to life this amazing script, and I hope you’ll be as excited as I am!” 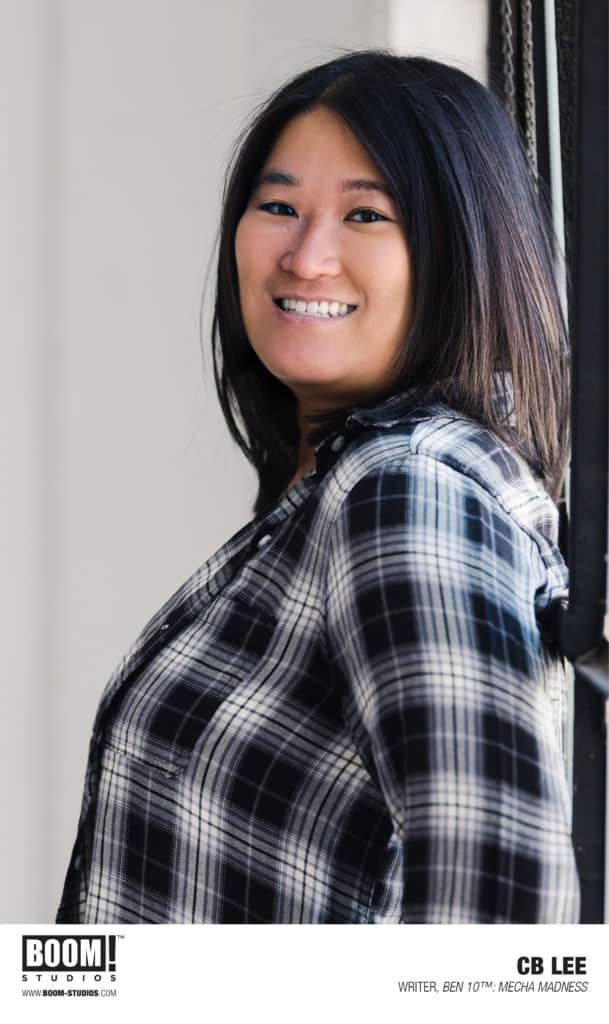 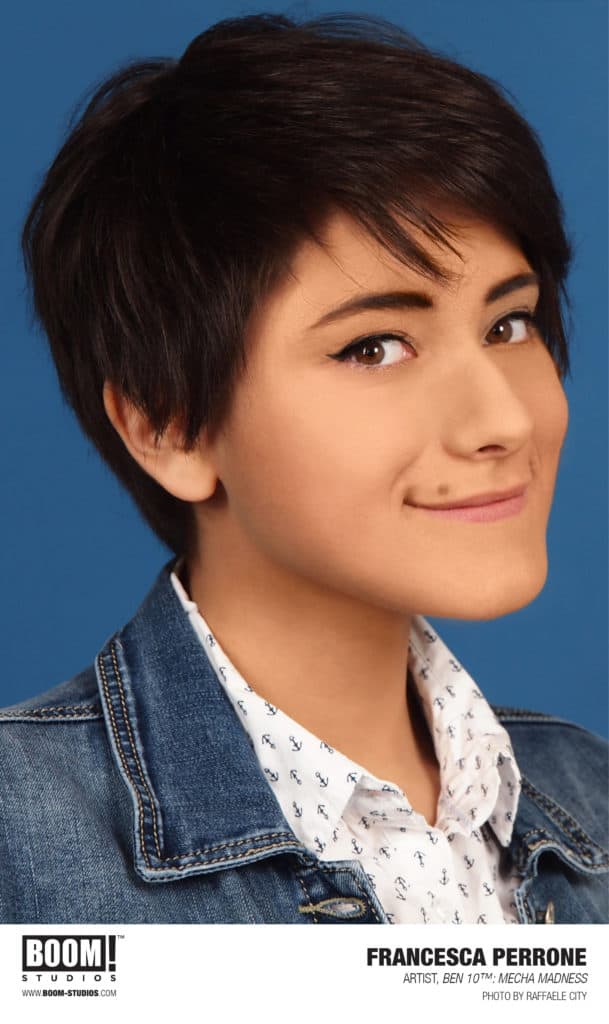 This is the fourth original graphic novel release from the partnership between BOOM! Studios and Cartoon Network, featuring a cover by artist Mattia di Meo (Adventure Time). Fans can find BEN 10™: THE TRUTH IS OUT THERE from CB Lee and Lidan Chen is available in bookstores everywhere, and keep an eye out for the upcoming debut of BEN 10™: FOR SCIENCE! from CB Lee and artist Mattia di Meo in July 2019.

“We had a lot of fun throwing Ben, Gwen, and Grandpa Max into an adventure that’s packed full of spooky fun for the team as they confront phenomenon that can’t be explained by science. . . or so we think.” said Matthew Levine, Editor, BOOM! Studios. “Will Ben prove that there are such things as ghosts? And if they are real, how will Team Tennyson deal with being stuck in a house full of them?! CB and Francesca push Ben to the limits of understanding in this thrilling installment of Ben’s adventures.”

BEN 10™: THE MANCHESTER MYSTERY is the latest release from BOOM! Studios’ award-winning KaBOOM! imprint, home to comics for middle grade and younger readers including licensed series such as Adventure Time, Steven Universe, Ben 10, and Over The Garden Wall, along with original series like Just Beyond: The Scare School by R.L. Stine and Kelly & Nichole Matthews, Hex Vet by Sam Davies, RuinWorld by Derek Laufman, and Pandora’s Legacy by Kara Leopard, Kelly & Nichole Matthews.

Cartoon Network’s Ben 10™ was recently greenlit for season four and is expected to premiere globally beginning 2020. The new season will follow Ben, his cousin Gwen and Grandpa Max on adventures to some of the world’s most popular destinations including Italy, Japan and Mexico. Season four will continue to empower its worldwide fanbase through new alien transformations, action-packed battles with villains and more. Ben 10™ is produced by Cartoon Network Studios and created and executive produced by Man of Action Entertainment.

Print copies of BEN 10™: THE MANCHESTER MYSTERY will be available for sale in March 2020 at local comic book shops (use comicshoplocator.com to find the nearest one), bookstores and the BOOM! Studios webstore. Digital copies can be purchased from content providers, including comiXology, iBooks, Google Play, and the BOOM! Studios app.