BOOM! Studios today announced THE MANY DEATHS OF LAILA STARR, a new original series from acclaimed comics creator Ram V (Swamp Thing, Blue in Green) and superstar artist Filipe Andrade (Captain Marvel) that explores the fine line between living and dying in Mumbai through the lens of magical realism, available in April 2021. 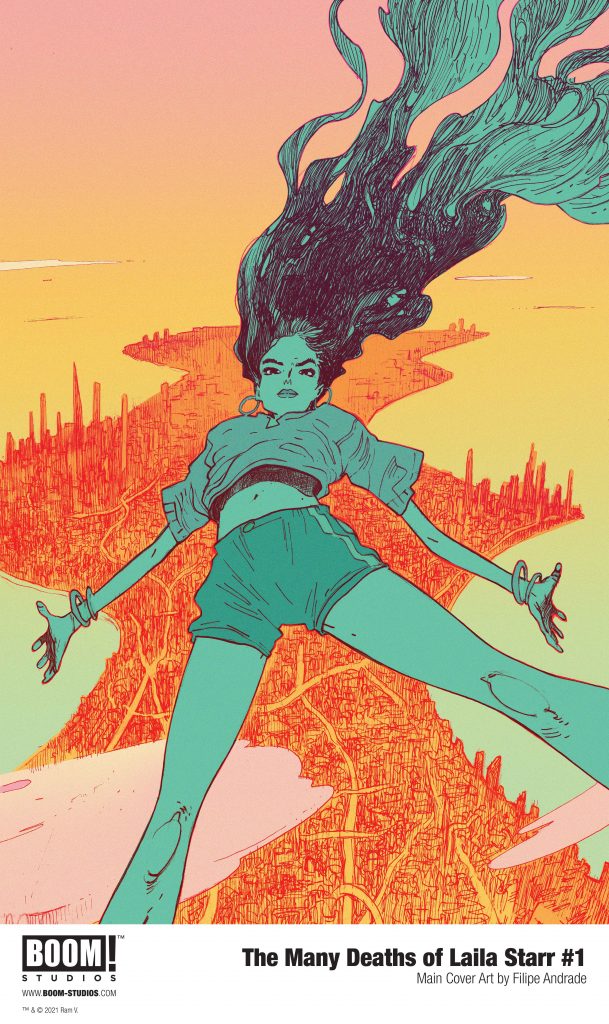 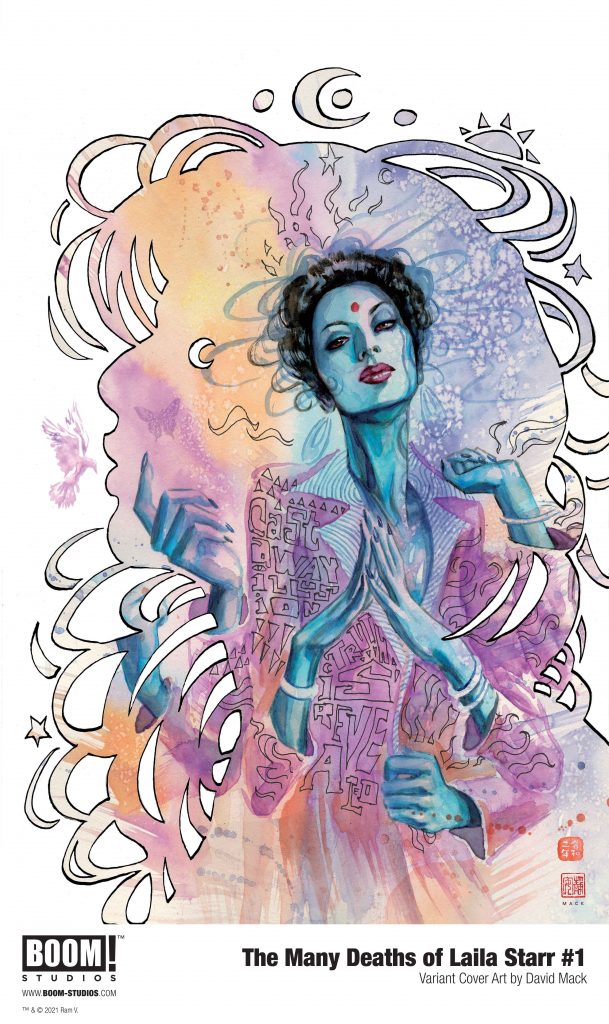 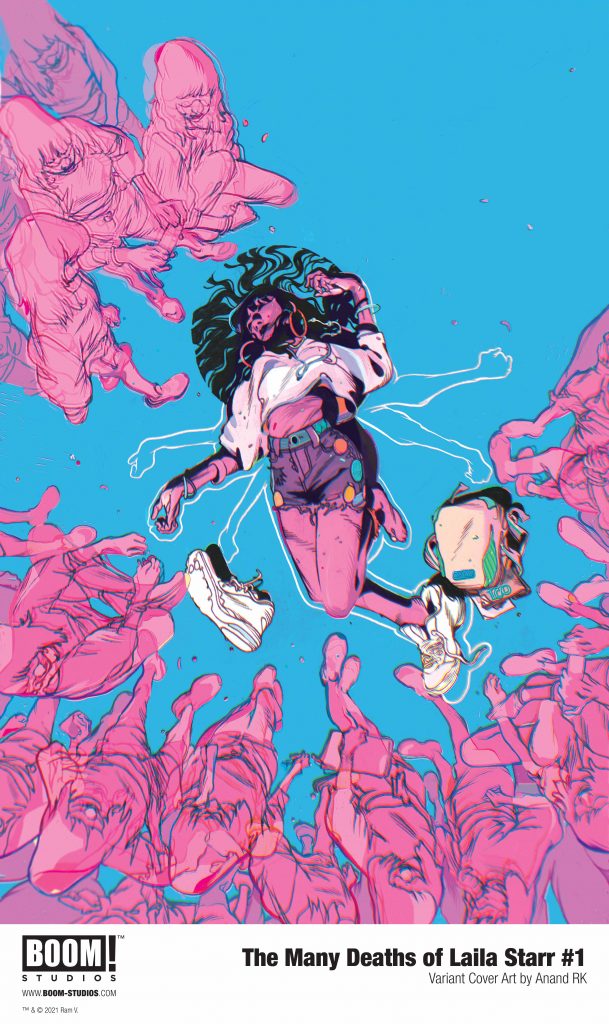 Ram V is an award-winning author and creator of comics and graphic novels such as Grafity’s Wall, These Savage Shores, and Blue in Green. Since publishing his first book in 2016, Ram’s work has gone on to garner critical and popular success and multiple awards. Apart from creating original work, since 2018, Ram has also written for iconic characters and titles at DC Comics and Marvel Entertainment.

“THE MANY DEATHS OF LAILA STARR is a strange, funny, odd and occasionally morbid comic about death, love, innocence and the human condition. Where I come from, gods are flawed, perhaps more so than people. Life is an endless cycle of trying to get things right, and death? Death is only the beginning,” said Ram V. “Judgments are few and far between and all things are rife with contradictions as they should be. So Filipe Andrade and I would like to welcome readers to this near-future Mumbai, this immensely beautiful mess of human lives where a god must first contend with death…many deaths, before she may begin to understand a thing or two about life.”

Filipe Andrade is an artist from Lisbon, Portugal. Andrade studied sculpture in Lisbon’s fine art university. He has collaborated and published with BOOM! Studios, Marvel Comics, MTV Networks, Riot Games, Passion Animation Studios and more. Aside from his personal work, he has also collaborated with Auéééu Theatre Company since 2014. You can find his work @filipe_andrade_artist.

“THE MANY DEATHS OF LAILA STARR is a story about love and connection, but also about the beauty and cruelty of it,” said Andrade. “Ram writes beautiful words touched by a mystic and exotic perfume. I want to transport and involve the reader in this trippy and vibrant world.”

“From the fantastical realm of the gods to the bustling streets of Mumbai, Ram and Filipe have crafted an arrestingly modern world for a story about the oldest mysteries of humanity,” said Eric Harburn, Senior Editor, BOOM! Studios. “Get ready for a darkly funny and complexly layered new series as you discover the inexplicable life and MANY DEATHS OF LAILA STARR!” 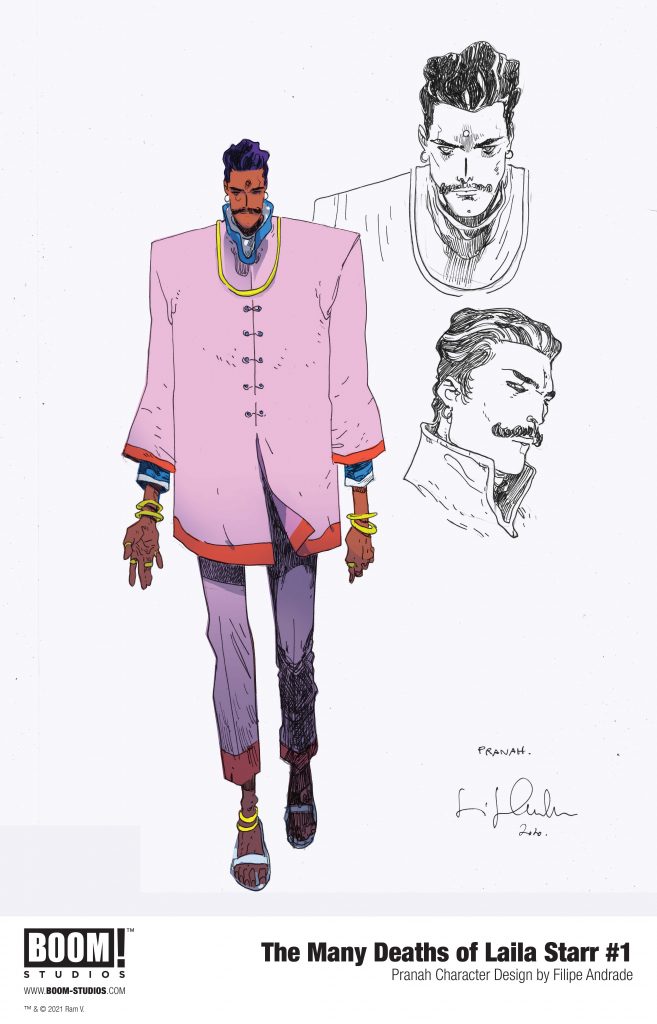 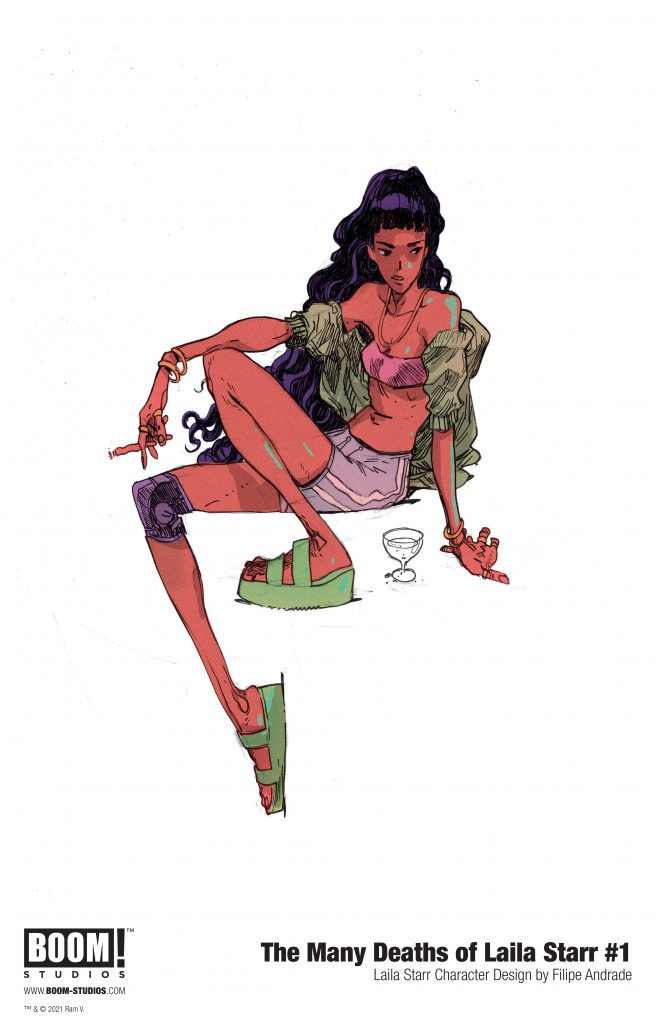 THE MANY DEATHS OF LAILA STARR is the newest release from BOOM! Studios’ eponymous imprint, home to critically acclaimed original series, including BRZRKR by Keanu Reeves, Matt Kindt, and Ron Garney; We Only Find Them When They’re Dead by Al Ewing and Simone Di Meo; Seven Secrets by Tom Taylor and Daniele Di Nicuolo; Something is Killing the Children by James Tynion IV and Werther Dell’Edera; Once & Future by Kieron Gillen and Dan Mora; Faithless by Brian Azzarello and Maria Llovet; and Abbott by Saladin Ahmed and Sami Kivelä. The imprint also publishes popular licensed properties, including Dune: House Atreides from Brian Herbert, Kevin J. Anderson, and Dev Pramanik; Buffy the Vampire Slayer from Jordie Bellaire and David López; Firefly from Greg Pak, Lalit Kumar Sharma & Daniel Bayliss; and Mighty Morphin and Power Rangers series from Ryan Parrott, Marco Renna, and Francesco Mortarino.

Print copies of THE MANY DEATHS OF LAILA STARR #1 will be available for sale in April 2021 exclusively at local comic book shops (use comicshoplocator.com to find the nearest one) or at the BOOM! Studios webstore. Digital copies can be purchased from content providers, including comiXology, iBooks, Google Play, and Madefire.